Issued in respect to s342 Telecommunications Act of 2014

In September, 2019 the FSM Congress approved Public Law 20-141 Sect 2 (1)(b) which appropriated $1.2M for FSMTC Yap Cellular Upgrade.  The funding involves upgrading of existing cellular sites on Yap that the FSMTC currently operates and maintains.  It will allow for backhaul upgrade to these sites to enable and upgrade from GSM/UMTS to LTE coverage.  It will also provide two additional sites to the outer islands of Yap: Fais and Woleai. FSMTC has prepared layout plans and detailed design on implementing Yaps’ Cellular Upgrade.  Implementation will commence as soon as funding is available.

FSMTC is a communications provider in the Federated States of Micronesia who is governed by a Board of Directors whom are appointed by each Governor of the 4 states. The 5th Director is appointed directly by the National Government while the President/CEO of FSMTC is an ex-officio member of the Board.  FSMTC’s service include Traditional POTS and voice services, GSM/UMTS/LTE Cellular, Television (DVB-T and Cable), and Internet.

The services will be built to the ITU telecommunications standard.  The project will operate in two main phases. The first phase is building the backhaul network that passes to each site to allow for equipment upgrade. The second phase involves hauling materials to the two Yap outer islands and constructing the additional cell sites. FSMTC is yet to confirm the exact date that the project will start as they are still waiting for FSM National government to release funding.

INVITATION OF EXPRESSIONS OF INTEREST TO SHARE THE PROPOSED COMMUNICATIONS FACILITY 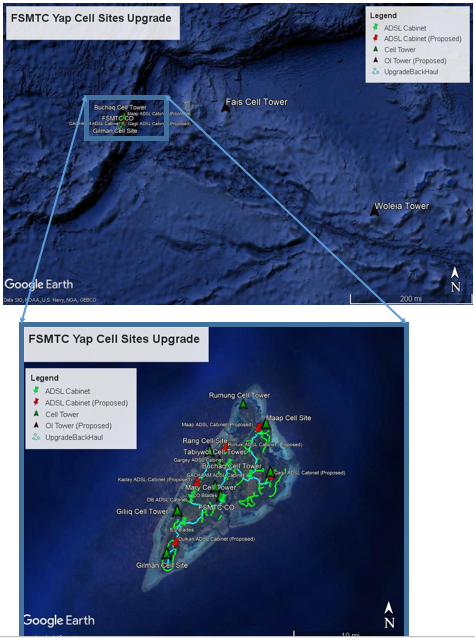